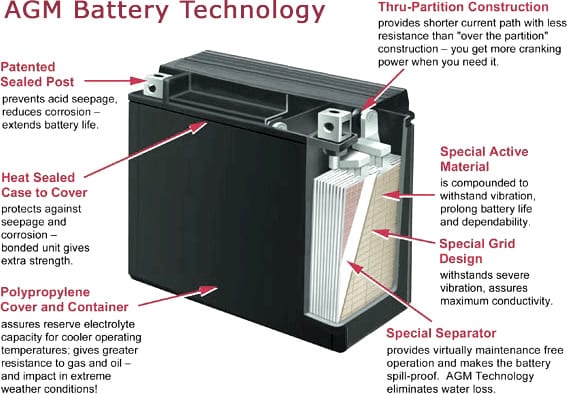 Technical Considerations
The advantages of AGM batteries are no maintenance, sealed against fumes, hydrogen, leakage, or non-spilling even if they are broken, and can survive most freezes.

AGM batteries are "recombinant" – which means the Oxygen and Hydrogen recombine inside the battery. These use gas phase transfer of oxygen to the negative plates to recombine them back into water while charging and prevent the loss of water through electrolysis. The recombining is typically 99+% efficient, so almost no water is lost.

Charging voltages for most AGM batteries are the same as for a standard type battery so there is no need for special charging adjustments or problems with incompatible chargers or charge controls. Since the internal resistance is extremely low, there is almost no heating of the battery even under heavy charge and discharge currents.

AGM batteries have a very low self-discharge rate (from 1% to 3% per month). So they can sit in storage for much longer periods without charging. The plates in AGM's are tightly packed and rigidly mounted, and will withstand shock and vibration better than any standard battery.